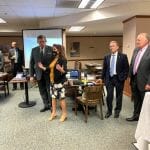 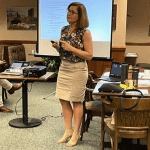 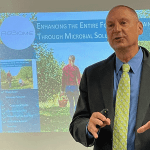 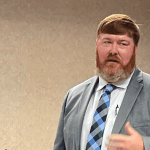 John Fleming, a farmer and partner with Fleming Brothers Farms, LLC in Halifax 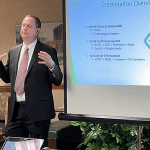 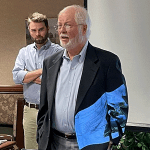 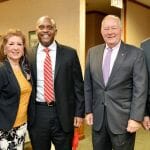 Two of North Carolina’s most innovative agricultural technology companies, AgBiome and SinnovaTek, along with their farming partners spoke to members of the Life Sciences Caucus and the Agricultural/Rural Caucus of the North Carolina General Assembly on Wednesday morning, Sept. 1.

NCBIO President Laura Gunter kicked things off by thanking caucus members for the swift action they took to improve North Carolina’s licensing process for manufacturing and distributing a drug. At the July meeting of the caucus, G1 Therapeutics CEO Jack Bailey told members that, unlike other states, North Carolina requires that a company have FDA approval for a drug before applying for a license to manufacture the drug. In other states, the manufacturer can apply for a conditional license that becomes active once the drug is approved, preventing an unnecessary delay in getting to market.

“Senators Newton and Woodard said, ‘We can do something about that,’” Gunter said.

The caucus co-chairs drafted legislation to allow the NC Department of Agriculture to improve the licensing process. The adjustment was offered as an amendment to H95, which passed the Senate unanimously on Aug. 25, passed on concurrence in the House on Aug. 31. Gov. Roy Cooper signed H95 into law on Sept. 2.

Scott Uknes, Ph.D., co-founder and co-CEO, of AgBiome kicked off the day’s presentations by explaining how his company uses microbes to control pests and prevent diseases in crops. He was joined by John Fleming, a farmer and partner with Fleming Brothers Farms, LLC in Halifax.

AgBiome explores the microbial world to find alternatives to the synthetic chemicals currently used in agriculture. Its first product, Howler, is a microbial fungicide that is active against about 300 different pathogens and protects key crops, such as strawberries, grapes, apples, squash, cucumbers and stone fruits like cherries. Uknes said that AgBiome had submitted two more products for approval and expected to launch 10 more in the next five years.

A company needs three things to succeed, Uknes said: an idea, a workforce and access to capital.

“One thing that is kind of a gap in North Carolina is the money,” he said. “There are very few venture capitalists.”

That’s why companies tend to launch in places like San Francisco, Boston, New York and Washington, he said.

Unkes suggested that legislators consider authorizing the state to invest in venture capital firms with the condition that funded companies set up an office in the state.

“We don’t have the climate of investment here, and we need that,” he said.

Up next was SinnovatTek, a North Carolina State University spin-off and a for-profit public benefit company focused on innovation in food processing. The company works to reduce food waste and create better-for-you products, said President and CEO Michael Druga. The company is growing rapidly, from 8 employees last year to 30 this year and an expected 50 to 60 next year, he said.

SinnovaTek tries to “democratize” food processing for smaller farmers, Druga said. The company offers all the capabilities of a large food processor, but its operation makes it possible to bring a new food product to market for $5,000 instead of a million dollars (or at least several hundred thousand). A small food processing operation can even be set up in a farmer’s field. Produce that won’t cut it on supermarket shelves, like “ugly” sweet potatoes, can immediately be processed into a puree with a shelf life of up to two years.

Druga told legislators that grants were key to SinnovaTek’s success, particularly two rounds of SBIR funding the company received. He said that the One North Carolina Small Business Program, which provides matching funds to companies that win federal SBIR and STTR grants, was an extremely valuable program but would be much more useful if it were funded on a recurring basis.

The SBIR program favors companies that will be able to leverage federal funds to attract additional monies, Druga said. But when NC companies apply, they usually cannot include One North Carolina Small Business Program money as leverage because they don’t know for certain if the funds will be available the next year. Druga encouraged legislators to include support for the One North Carolina Small Business Program as a recurring item in the state budget.