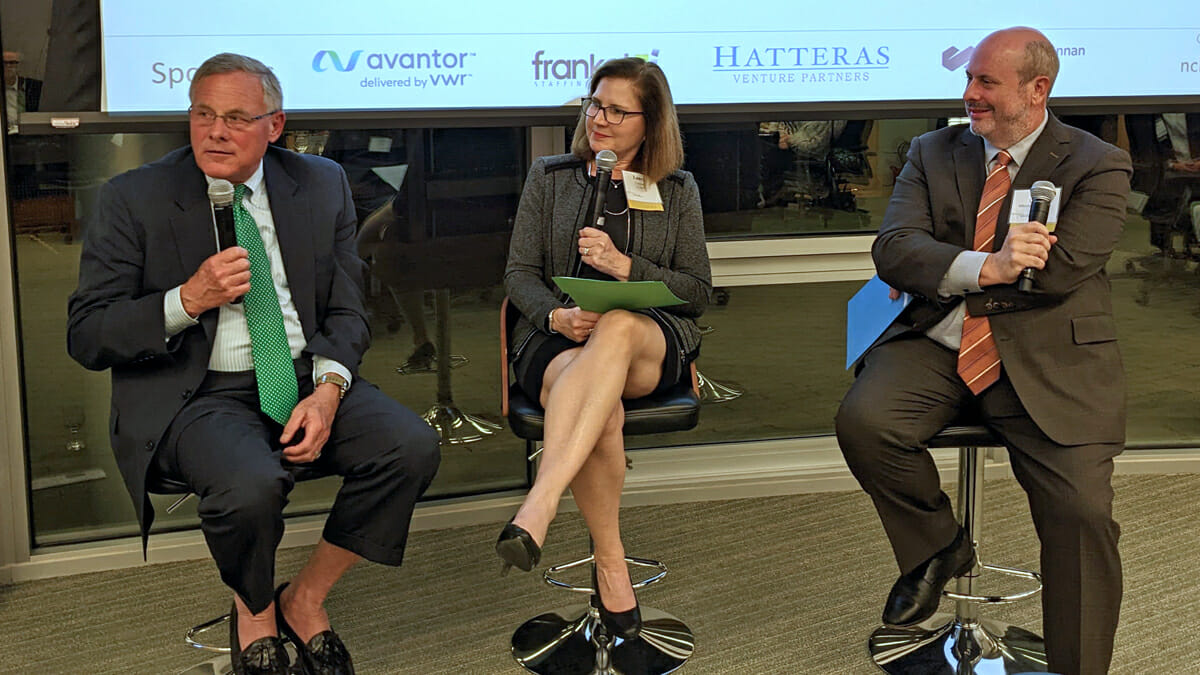 Sen. Richard Burr reflected on his 28-year career in Congress and discussed FDA reform, the nation’s response to future pandemics and the pitfalls of the nation’s regulatory system at the 2022 NCBIO Annual Dinner held Monday, Oct. 10, at the NC Biotechnology Center.

Burr is retiring in November after 10 years in the House of Representatives and 18 years in the Senate. He chaired the Senate Intelligence Committee from 2015 to 2020. He is the ranking member of the Senate Committee on Health, Education, Labor, and Pensions and is also a member of the Committees on Finance and on Aging. In the House, Burr authored the FDA Modernization Act of 1997. He also helped create the National Institute for Biomedical Imaging and Bioengineering.

Burr said that he’s never been more excited about the future of the health sciences and that he was really looking forward to seeing the next 20 years. However, government regulators are not ready to cope with the level of innovation that we’re going to see.

“It's going to run into an architecture of government that hadn't changed in the last 30 years,” Burr said. “An architecture that's not fast, that doesn't like innovation, that is scared to step out on a limb and take a step that might not have support.”

Burr said that the decision earlier in the year to not cover Alzheimer’s drugs approved under the FDA’s Accelerated Approval pathway is an example of the government’s shortcomings.

“Using the endpoints for at least conditional approval is something I've been trying to get them [FDA] to do for 20 years,” Burr said. “And finally, we've done it, and the abuse that they've taken over this — I guess I shouldn't have been surprised, but I was disappointed. But I was also incredibly supportive of FDA for not backing off.”

How to be heard

If you want a member of Congress to take up an issue that is important to you, it’s not enough to simply go to Washington and tell your story, Burr said. You have to tell it in a way that educates the member of Congress so they know what action they need to take.

“If you took off your shoes, you could count members of Congress that can talk to you about health care on both hands and both feet,” he said. “So don't think you're starting with a pool that are rich in knowledge of what you're up to talk about.”

Being able to put a human face on any problem or issue you bring to your Congressional representatives is an absolute must if you expect them to take action, Burr said.

“I've got to admit that looking back over 20 years, I laugh at some of the issues that I've taken up,” he said. “But my staff did a great job of presenting the human face. And the truth is, it was the human face that drove the passion for me to actually get the FDA to do it.”

Burr said his interest in FDA reform began early in his career in the House when he was asked by leadership to work with Rep. Henry Waxman on the first bill to revamp the FDA since it was created in 1935.

“This is where passion comes in,” he said. “This was not something that could be done in 12 months.”

“What we're focused on right now is trying to look at how FDA responded to COVID and make sure that they don't go backwards from a standpoint of the precedent they've set," he said.

The passage of FDAMA included the reauthorization of the FDA user fees enacted in 1992.

“And as many of you in this room know, I've either been the hero of user fees or the villain, just depending upon which role I chose to play on any particular day,” Burr said. “I've never thought that user fees were good. I think Congress ought to appropriate that money for the FDA, and the industry should not be held hostage.”

Burr said he believes that having companies pay for people to review their applications creates a conflict of interest, but the program is too big to ever go back to review just being funded by Congress.

“And there are some much bigger issues I think we're gonna have to deal with like rebates as it relates to pricing more so than FDA user fees,” he said.

When COVID hit, there was a structure already in place to allow the government to address it, Burr said. Congress had passed the Pandemic and All Hazards Preparedness Act in 2006, and it has been reauthorized every five years, most recently in 2017.

“I think it's safe to say that had we not had that in place, we would not have had a vaccine in 12 months,” he said. “Congress didn't have to enact any policy changes for the development of the vaccine and for the deployment of the vaccines or the purchase of a vaccine or for the liability protections for a vaccine because it was all in the 2006 bill.”

The COVID response was successful because government finally partnered with the private sector, Burr said, and companies worked together.

"I never expected Merck to produce vaccines for Pfizer,” he said. “But they did, thank goodness, we needed it, but I can't go into the future assuming that that's going to happen again.”

The U.S. needs to carefully focus on how we build our manufacturing capabilities, Burr said, especially as there are countries around the world who are interested in building their own vaccine industry.

Discussion turned to the World Trade Organization’s TRIPS waiver, which granted foreign manufacturers the right to produce American vaccines without licensing the technology from the patent holders. Burr said he thought the Biden administration realized it was a mistake in the first 48 hours.

“It was a mistake to open that door and to even talk about it,” he said. “You don’t create an incentive for people to innovate if in fact you threaten if they’re successful to take their intellectual property away and let somebody else share it.”

Burr said that he thinks the country needs to make sure that there is a foundation in place to allow private capital to fund innovation at an accelerated rate.

“I don't want to downplay in any way shape or form the company's names that we've known for the last 20 and 30 years out there, but a lot of the innovation is coming off of the bench somewhere from a company that we've never heard of,” Burr said.

Burr also discussed the Advanced Research Project Administration for Health created by President Joe Biden. Burr said he thought he envisioned ARPA-H differently that he thought the president did.

“I look at an entity that's out trying to find the best technologies that they can deploy and that they can partner with to try to create a cure for cancer,” he said. “So we're after the same end goal, we just approach it in a different way.”

Burr said he thought he was going to lose the battle to locate ARPA-H outside of Washington, but he said that he hoped that if there was a core staff in D.C., then the rest of the organization could be spread across the country.

“I see it very much like a private-capital process where we're identifying promising technologies,” he said. “We're looking at the technology and the company and saying, ‘Here's the portal within the federal government you need to go through.

“And if your technology passes that first test, then we funnel you into the already established pathways that get you through the Valley of Death.”

Burr said ARPA-H will likely be included in the omnibus spending bill for FY 2023.

“There will be every bit the opportunity for these ARPA-H experts to be co located here [in North Carolina], possibly elsewhere in the country,” he said.

Finally, he said that Congress will probably limit the length of service for those serving with ARPA-H to something like a three-to-five-year term, so that employees of various companies could serve a defined term and then return to their jobs.

Burr was asked if he thought the country’s political factions would be able to return to being able to have civil discourse and debate.

“Sometimes it has to get really dark before the light, and I’m not sure it’s dark enough yet,” he said.

“I think this may potentially be the last election cycle we see that is this divisive,” he said. “We can’t change Washington. You can’t legislate this change. It will change when the American people get flat fed up with it.”

There are no checks and balances on the information people are choosing to receive via the Internet and social media, he said.

“If you want to believe everything you read on it [the Internet], you're probably going to be embarrassed but you can do that if you want to.”

Burr said that sometimes candidates who are elected for ideological reasons don’t understand that they’ll have to govern when they’re in the majority.

“You have to govern; you have to get things done,” he said. “You can't just shut down the government. You can't just not allow the Federal Reserve to borrow money especially when we're $31 trillion in debt.

“At the end of the day when you're in the institution, you have to make a decision as to whether you want to try to solve problems versus create them,” he said. “And we're going to go into a conundrum here in December.”

Burr said that he expected Republicans to take control of the U.S. House and the Senate and be in the majority when the current continuing resolution funding the government expires Dec. 16.

“They're going to be some, probably in both bodies, who say we only want to do a 30-day spending bill so that we can come back in when we're in control and do the whole thing,” he said. “Worst mistake they could ever make.

“Divided government always gets you the best outcome. Period. End of sentence.”

“I'm still trying to figure out how to salvage the tobacco industry,” Burr said with a laugh. “And you know, it's an incredible thing: the solution to salvage for them is technology. And the most technologically advanced product, which is Juul.”

The electronic cigarette, while marketed incorrectly, would help people quit smoking, Burr said, but the FDA would not approve the product.

“They just don't understand that when you see a technology that's a game changer, you need to put everything into it because you never know what's next off of it,” Burr said.

Burr said that if the HIV AIDS epidemic happened today there would be no one in industry working on it because the system in place encourages you to take known paths, to only try keys that you know will unlock the door.

“We've got to have a robust community that's willing to raise money to try keys and to develop things,” he said. “If not, if you're a rare disease in this country, there's gonna be no solution for you. If you're a child that has a disease that only infects 200, you're screwed.”

We have to have a system in place that provides an incentive for people to find cures, Burr said.

“I don't care what we do if they [life sciences companies] haven't got the funding to get through the government maze, they're going to be unsuccessful,” he said. “And the loser in that deal is the patient on the other side.” 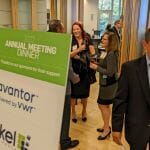 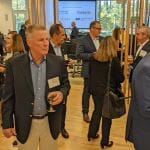 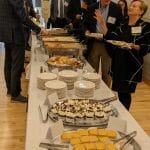 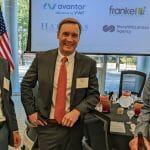 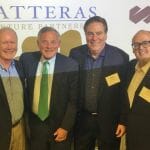 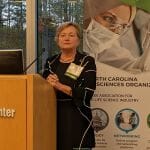 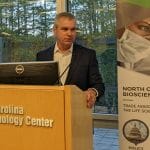 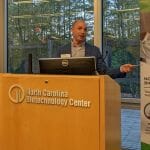 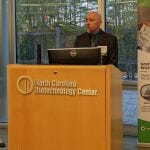