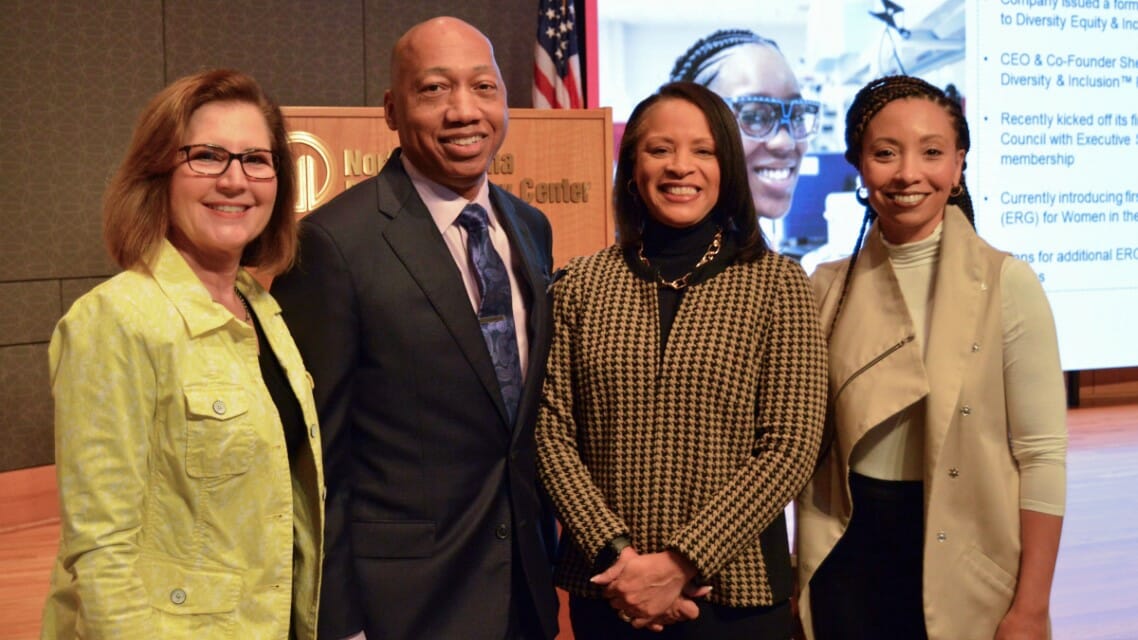 Some key takeaways from the discussions included the need to weave DEI into everything the company does; it can’t stand alone. Success requires DEI champions at the executive level, and it is important to align DEI goals with the organization’s business goals so that efforts can be properly resourced, evaluated and valued.

Building and maintaining a strong DEI program is hard, so be in it for the long haul. Commit to consistent, long-term communication and conversations to keep moving forward.

Fortunately, companies do not have to go it alone. Presenters encouraged NCBIO members to leverage their own internal resource and interest groups and to build partnership with external groups, such as schools and universities, nonprofits, advocacy groups and community organizations.

The Roadmap to Diversity event was made possible with the support of NCBIO’s partners, AskBio, Biogen, Merck, Novo Nordisk, Precision Biosciences and the Diversity Movement, along with sponsor Aqui Tu.

Celeste Warren, vice president, Global Diversity and Inclusion Center at Merck, delivered the event’s keynote address. These are selected excepts from her speech.

“Our workforces are more dynamic. They're more empowered, they're more enlightened, and they want answers not just from the standpoint of their functional skills and capabilities in our business performance, but also, what is it that our company stands for?

“Managers and leaders need to be prepared to be able to engage in those conversations and that dialogue around diversity, equity and inclusion. Not saying that they need to be all knowing because it's impossible to be able to be all knowing when it comes to various different cultures around the globe. But they should have a spirit of learning and empathy and listening so they can create that inclusive environment that we all want within our workforces.” 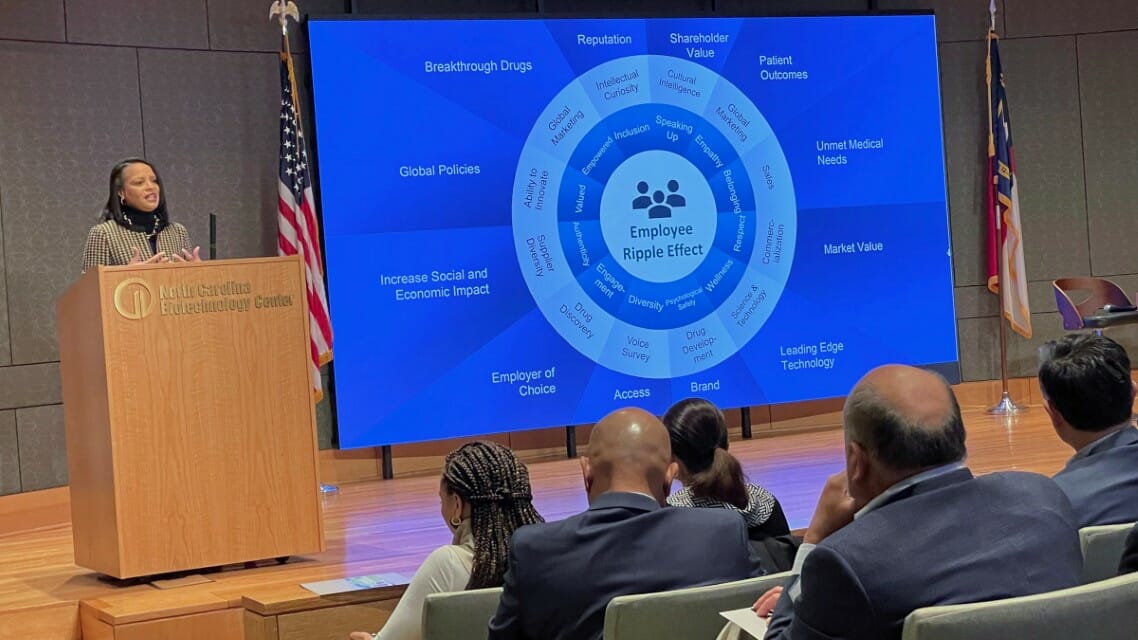 "If we surround them [employees] with what's in that blue, with that culture of inclusion, we will reap the benefits within our organizations. We will have stronger marketing strategies. We'll have innovation in our science, in our technology. We will have better strategies when it comes to our sales colleagues. We’ll have better technologies when it comes to our manufacturing practices. All that innovation, that creativity, will be unleashed in our business."

"And then we're expected to sort of walk through the doors of our companies like a car wash and just shed our identities, that stress that's coming from our communities and our families and walk in and be productive. And in this day and age, that's simply just not possible.

"We are dealing with all kinds of different things across a myriad of different issues, depending on your identity, how you identify across all of the dimensions of diversity, and we can't just shake that off. We'll be coming into the workplace. And so we want to make sure that our companies support us in those struggles."

We argue over rocks, the problem is the fence 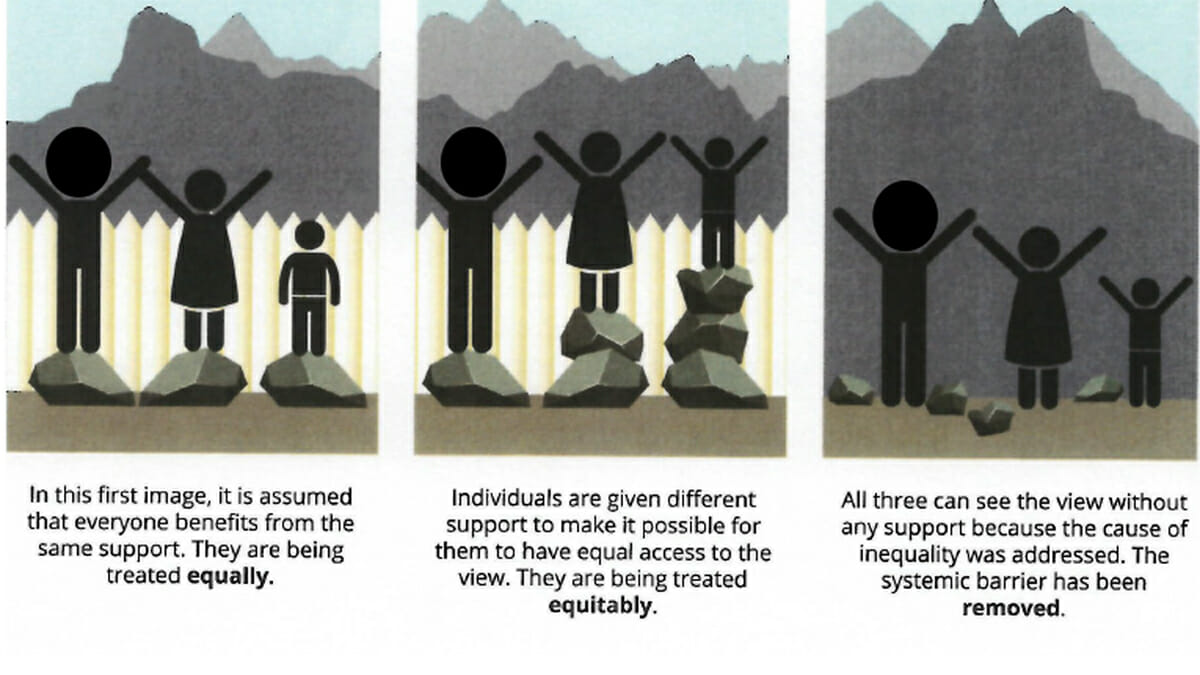 “The work that we do in equity is in the middle illustration, putting those rocks in place. Those rocks represent actions of equity so we can make sure that everyone can see over the fence. And that fence represents all of the -isms that exists in our organizations and in society: racism, sexism, homophobia, xenophobia, all of those different -isms that exist, systemic issues.

“We have to tear down the fence, tear down those systemic issues. We have to put those rocks in place. And we have to explain to the person who's been standing on that rock in the first illustration why that fence is there.”

"When it comes to diversity, equity and inclusion, don't be afraid to elevate your voice because when you elevate your voice, you're elevating it not just for yourself, but you're elevating it for thousands of others who have not yet found the power within themselves, the courage within themselves, to elevate their own voices." 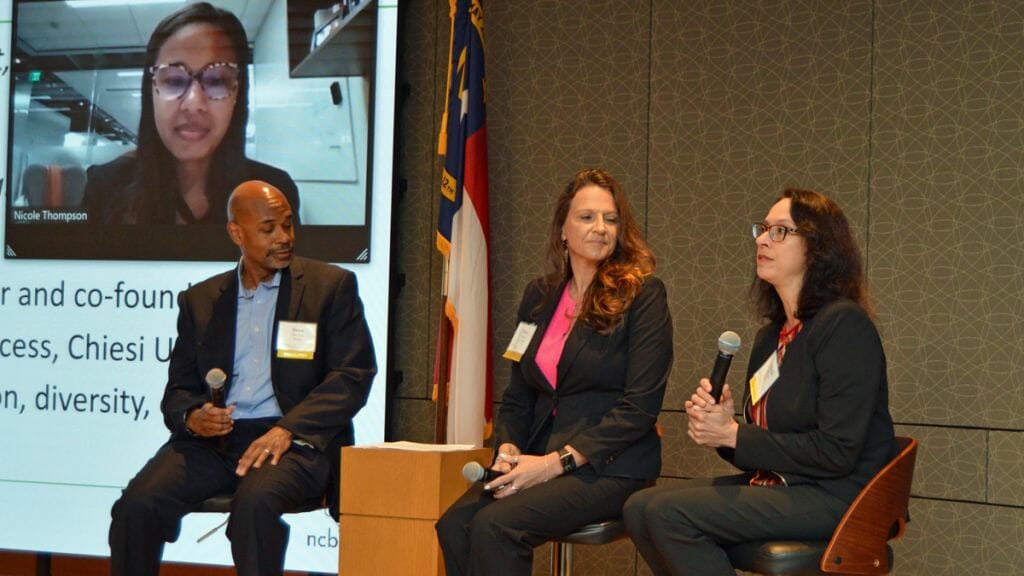 The first panel discussion of the day, "Success Stories," was introduced by Jamie Ousterout, vice president of client success at the Diversity Movement, and was moderated by Drew Duncan, director of human resources and global HR business leader at Biogen. The panel comprised Duncan and

Thompson said that the first step that they took was really to take a step back and evaluate how inclusive their hiring practices were as an organization.

"We looked at job descriptions," she said. "Are they written in a way that mitigates bias from a gender or age perspective? We had an honest conversation with ourselves around just the key requirements for a role and why they are required. Were we including qualifications that were artificial barriers to entry?"

In addition, she said BD partners with two historically black universities and with nonprofit organizations, such as the National Black MBA Association, National Sales Network and the Society of Hispanic Professional Engineers to target diverse candidates.

Thompson also said that BD continues to examine its talent pathway and was piloting a "returnship" program to help associates who have left the workforce reemerge and rejoin through BD. The company has also started to implement programs to help veterans transition into the private sector. BD also has a second-chance hiring program that focuses on helping individuals with a criminal record.

"One of the great things that Chiesi has done is really embed DEI language and goals in our five-year strategic plan, which makes our executive committee accountable to it, and then translates into yearly MBOs [management by objectives] around specific actions that we want to implement," Paine said.

Paine said that Chiesi has a sponsor for its DEI efforts at the executive level.

"Our executive sponsor spoke up at an all-hands meeting and told his story." she said. "And that really made a difference for us to start thinking about embedding DEI in our organization, and then his MBOs became my MBOs and others in the organization. That reporting back, asking the employees often about how well we're doing, is I think another important piece of that accountability." 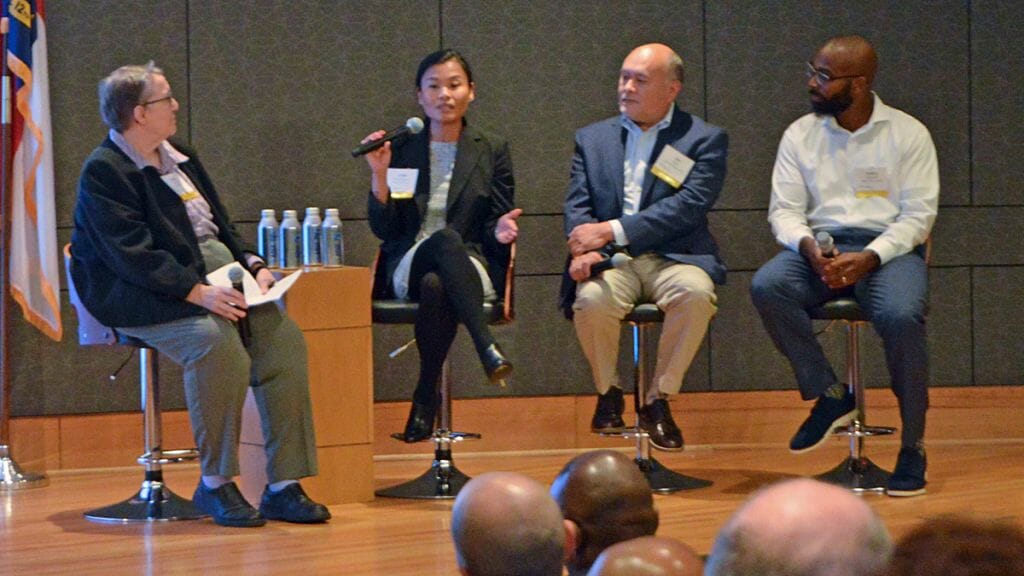 The second panel discussion of the day, "Overcoming Barriers," was introduced by Christine Daniels, Ph.D., AAV research and development scientist I at AskBio, and was moderated by Ronna Dornsife, instructional technology specialist at North Carolina Central University. The panel comprised Dornsife and

"There were never opportunities for me to use what I felt were my leadership skills," Dornsife said about her early career in the lab. "And so I looked to the diversity, equity and inclusion efforts in the employee resource group for LGBT people. I became involved with that group and was able to influence not just actions but policies, training throughout the organization. I eventually was invited to become part of the corporate diversity council, which meant that I had access and influence with higher level executives that I never would have had at the laboratory bench."

Montemayor talked about how important it was for her to be able to be her authentic self at Flad Architects.

"Since I am an outward facing person for my company, I'm typically one of the first, if not the first, person somebody who's a client or a partner meets for the first time," she said. "I feel like I have to be as authentic as possible right? I think people who see someone as disingenuous can know right away that something is off."

She told the attendees about a previous firm where she worked and was unique as an Asian American woman.

"I didn't know how to navigate it," Montemayor said. "And so I assimilated. I became everyone else. I became a middle aged white man. I started talking like them because I didn't want to stick out. I would sit proper, and I would talk about sports, and that's just not me.

"I started realizing there was a work Alma and a home Alma. It didn't it didn't sit right with me. So I had to look into myself and go what is going on? I'm not talking like myself. And it just took some time to realize no one's gonna really listen to me like that."

Ruiz agreed, saying, "Everyone has to feel that we can be our authentic selves. If it doesn't come from the top, everyone's fake in the company. And so I do bring my authentic self."

Jefferson talked about how important it is for employees to be comfortable and feel safe in the workplace.

"I think one thing managers specifically can do is create psychological safety on our team," Jefferson said. "And an easy way to put that into practice is, when you run your meetings, make sure that everybody's contributing and there's equity of voices in the room. If some folks aren't raising their hand, as a manager, speak up and say, 'Hey, I'd love to hear your thoughts on this or what do you think about this process?'

"By creating those norms, it's going to make them feel more like they belong," he said. "As a manager, you're also going to know more about your employees and how they think about those things. So it's a really easy step to make sure that there's inclusivity and more diversity of thought in your team." 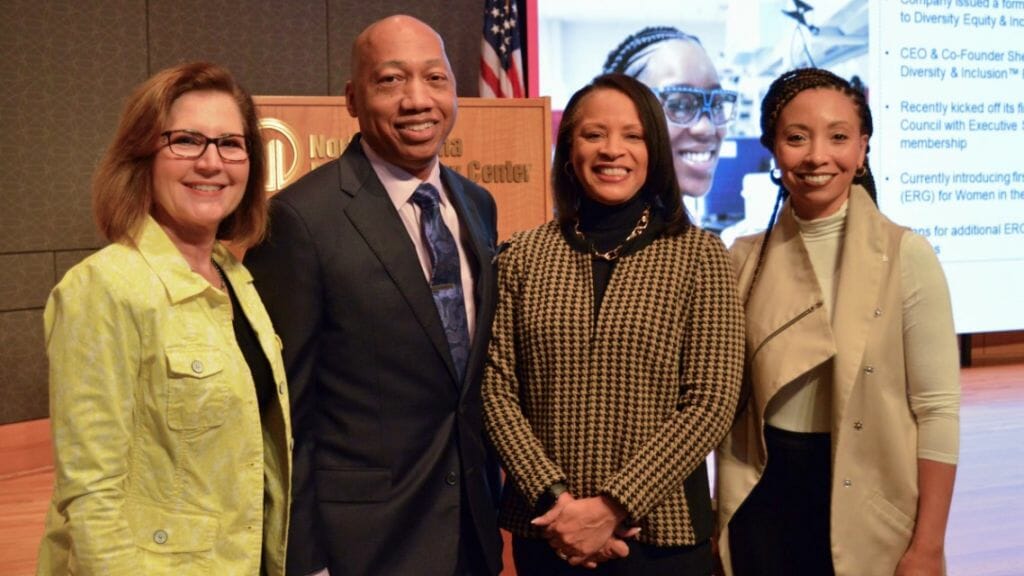 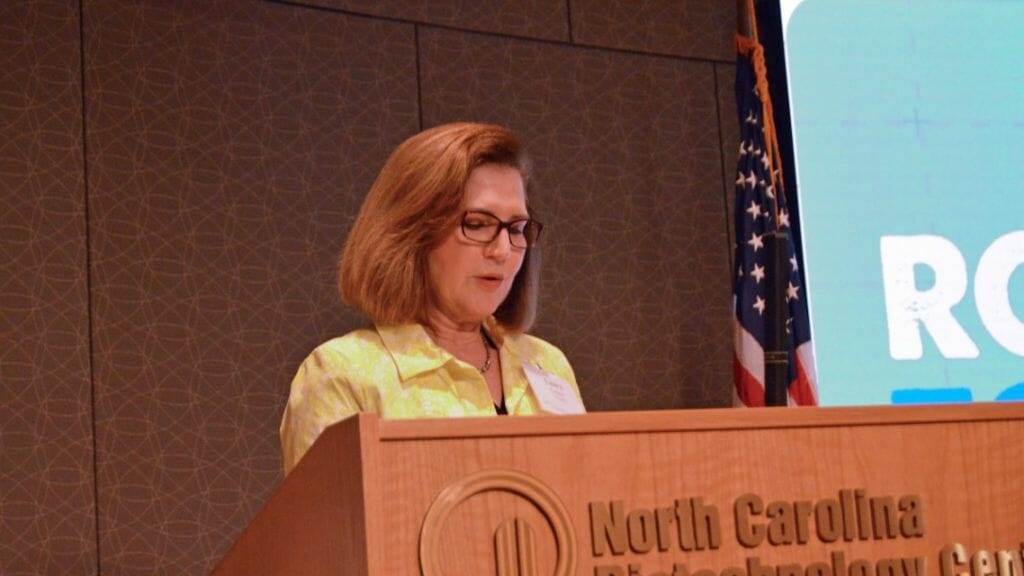 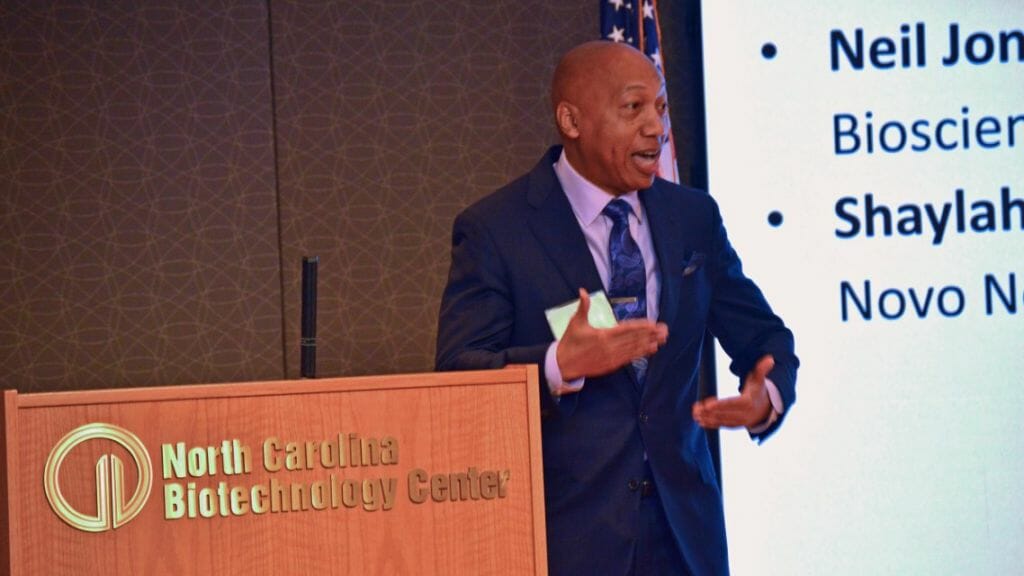 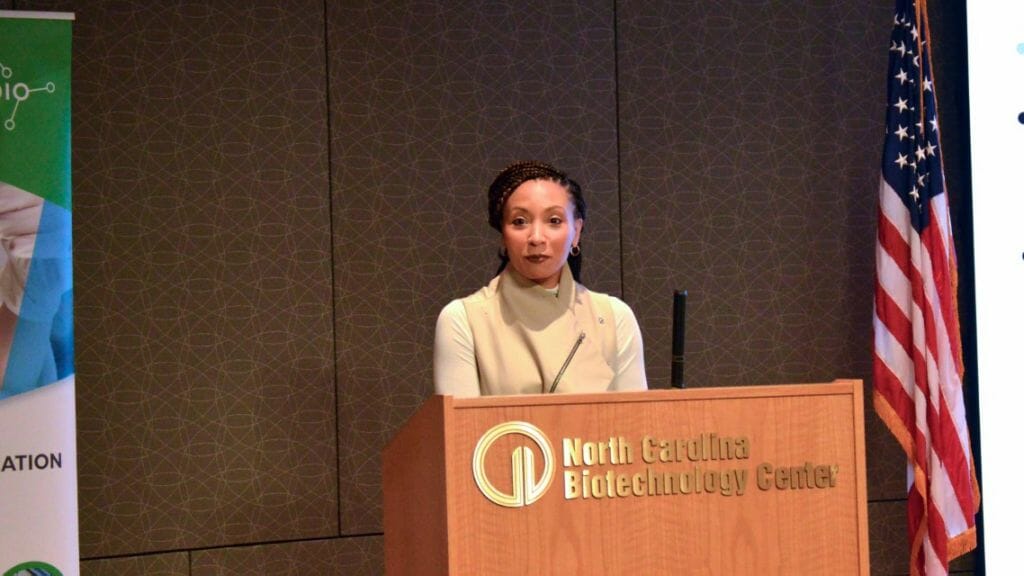 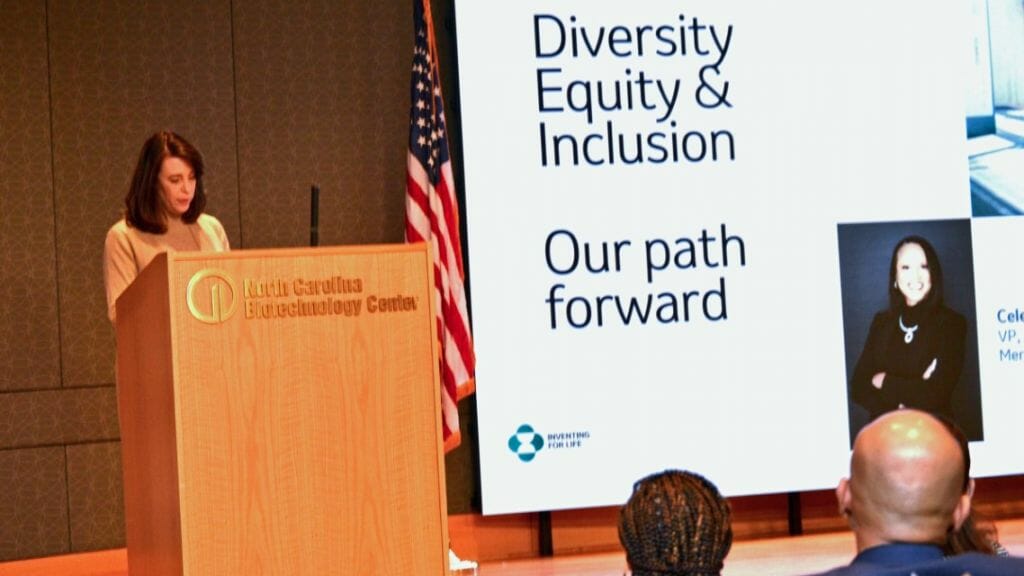 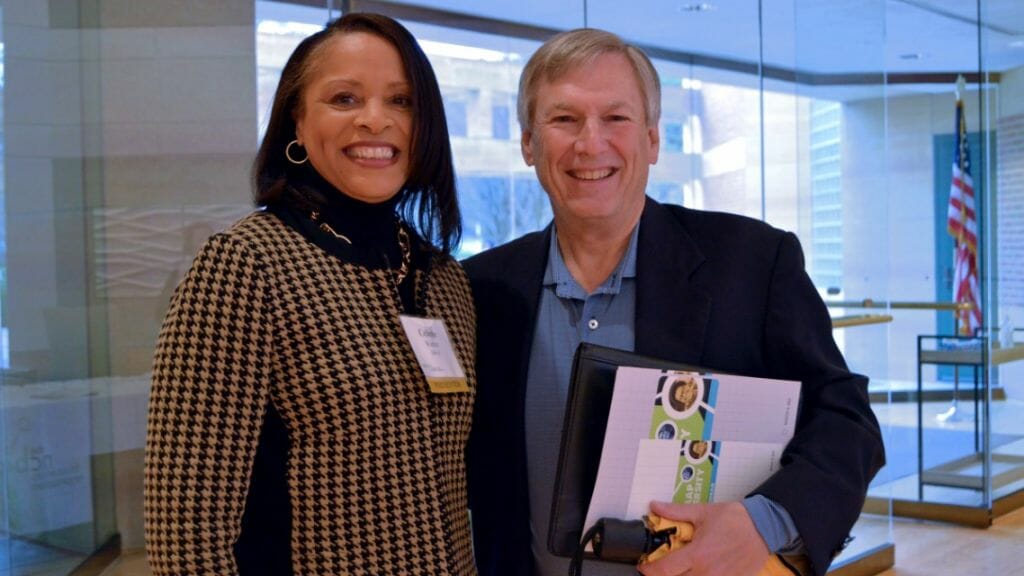 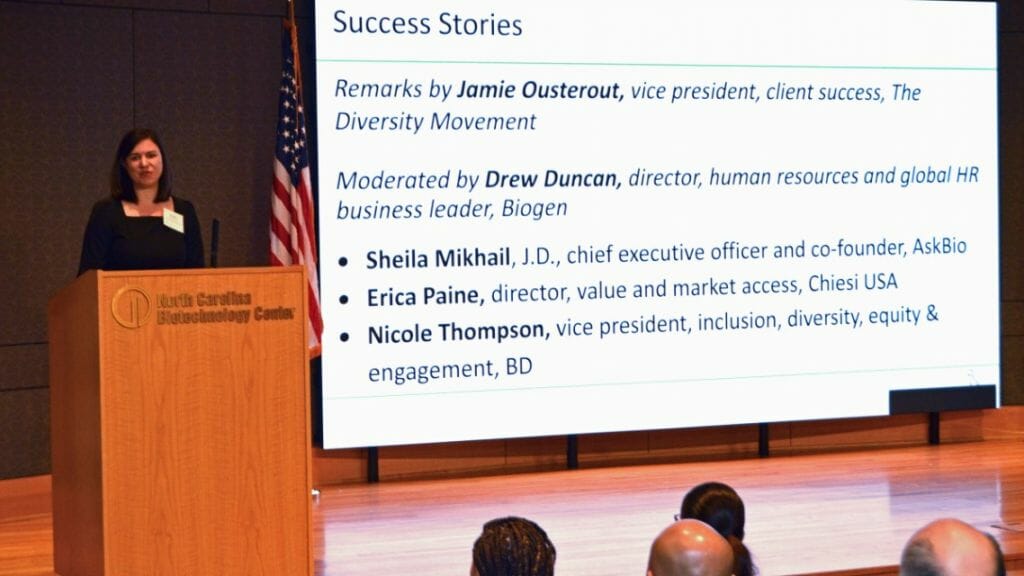 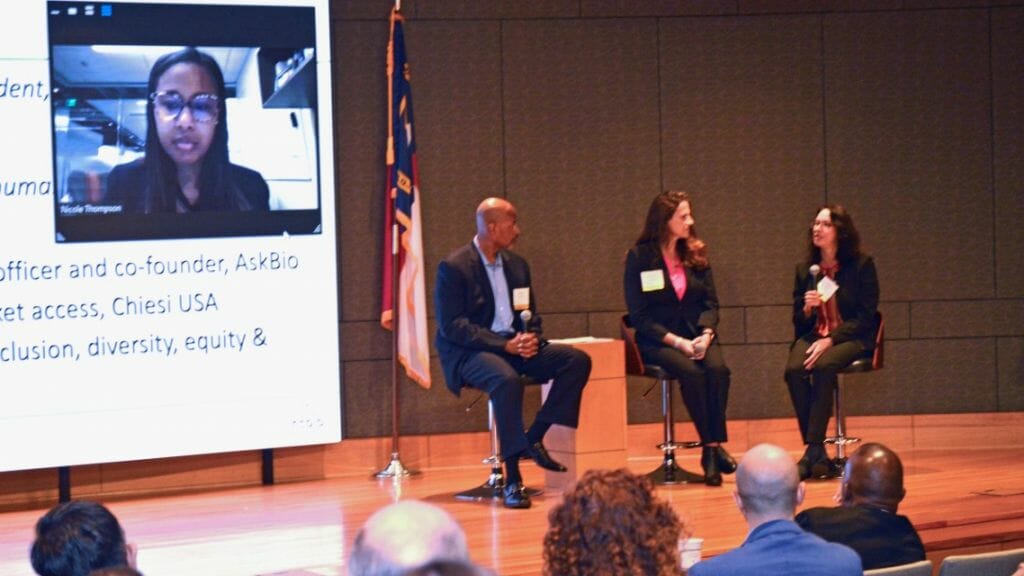 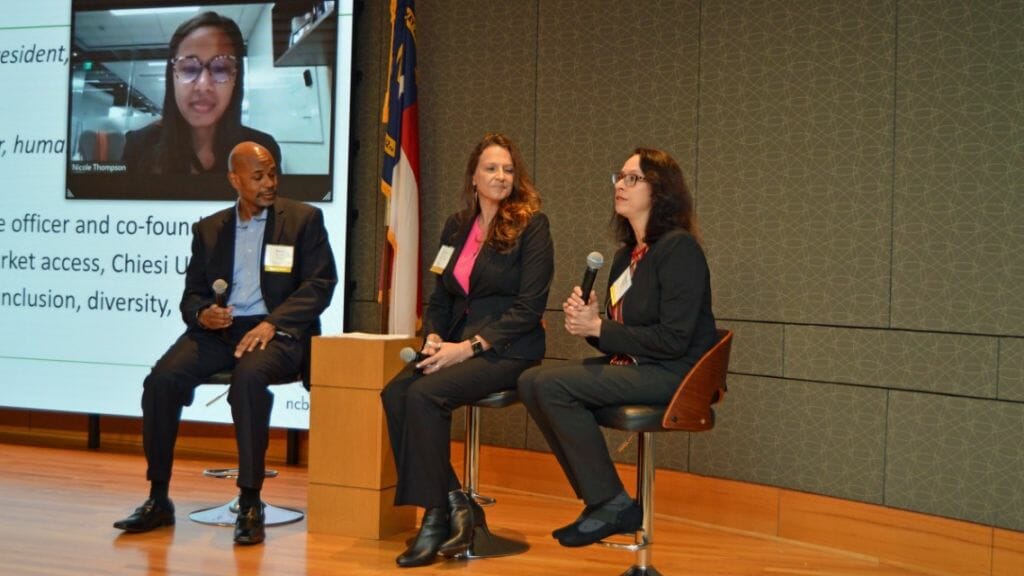 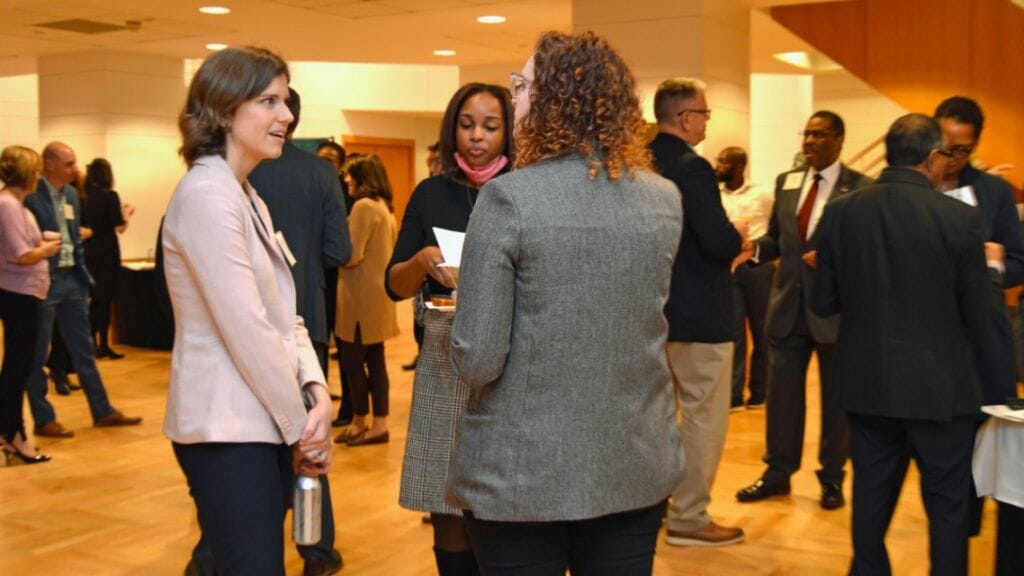 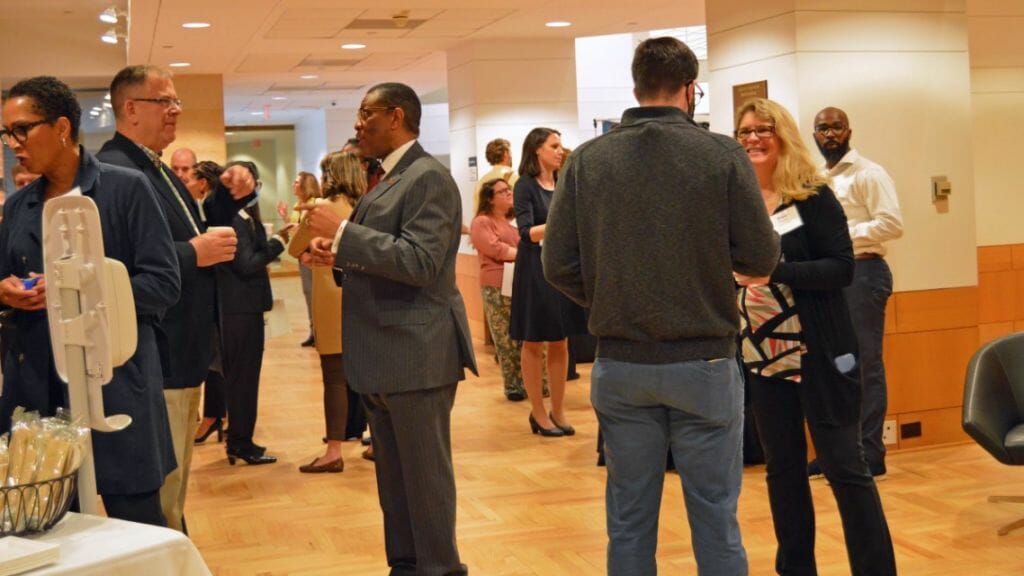 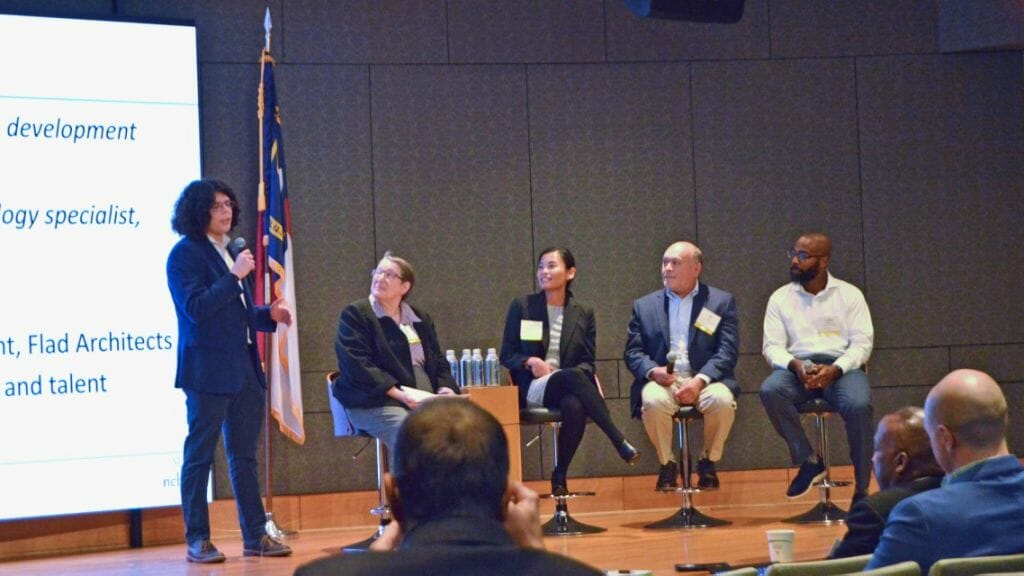 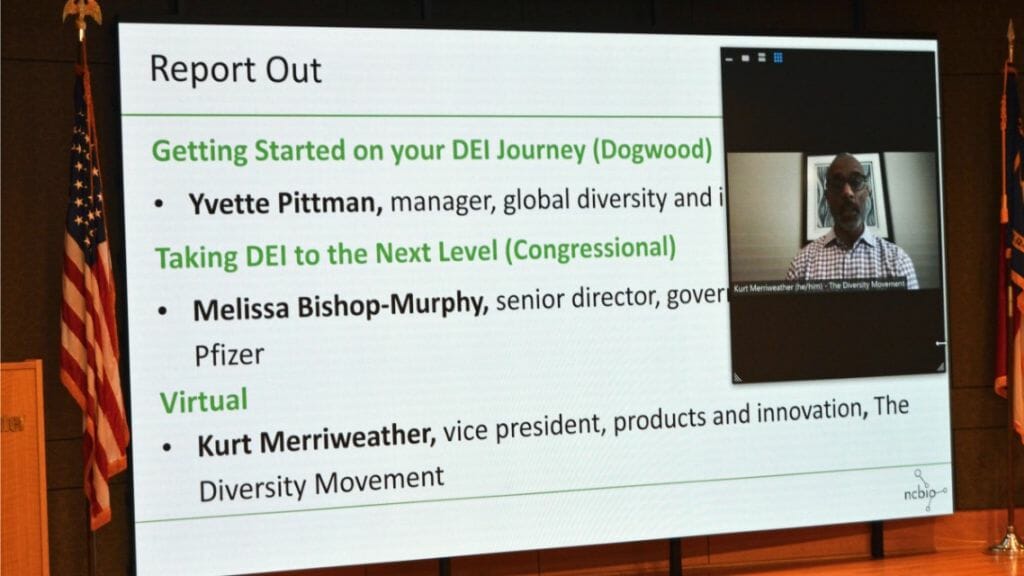 Participants broke out into three groups to discuss various aspects of DEI at their organizations. 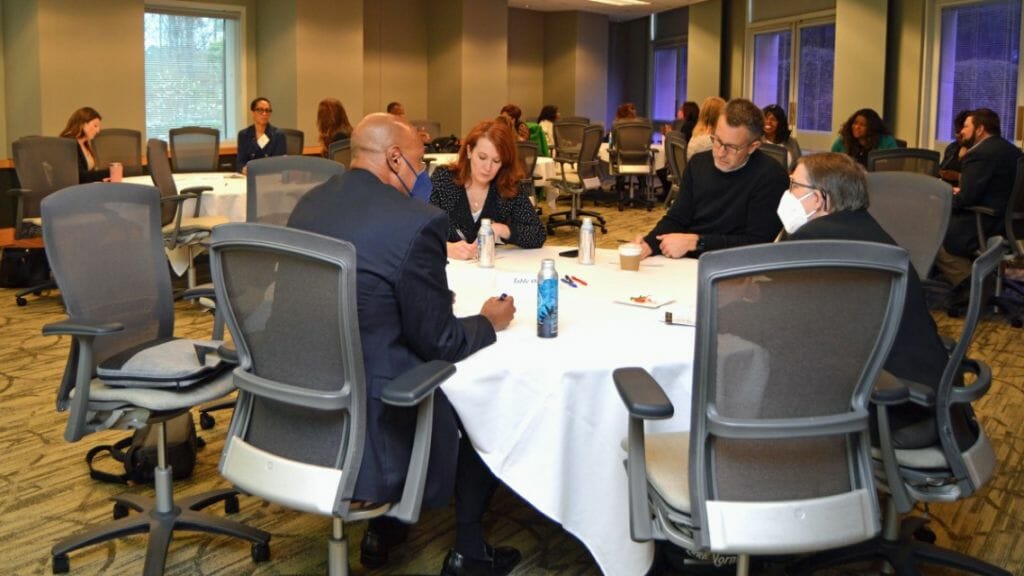 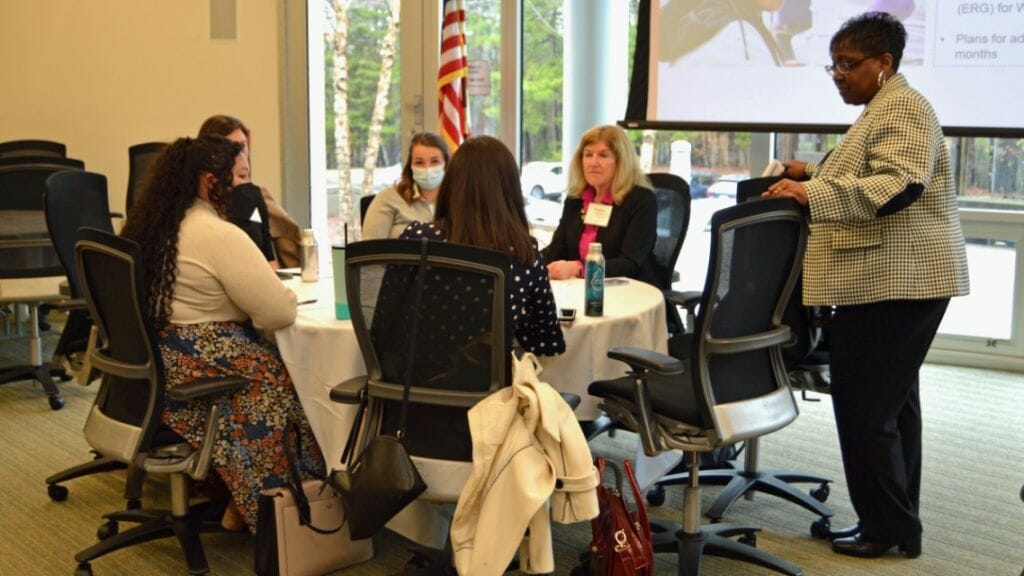 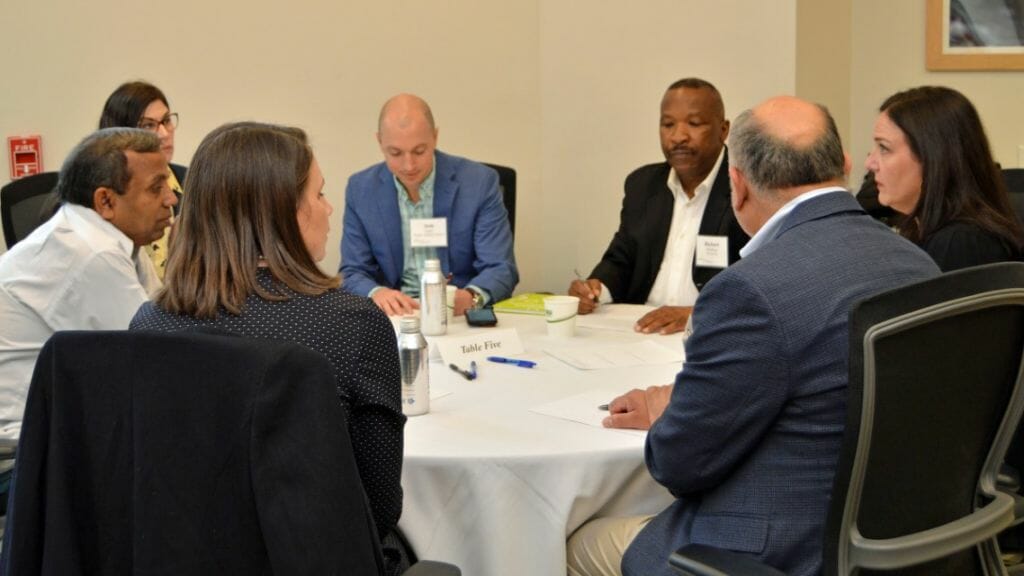 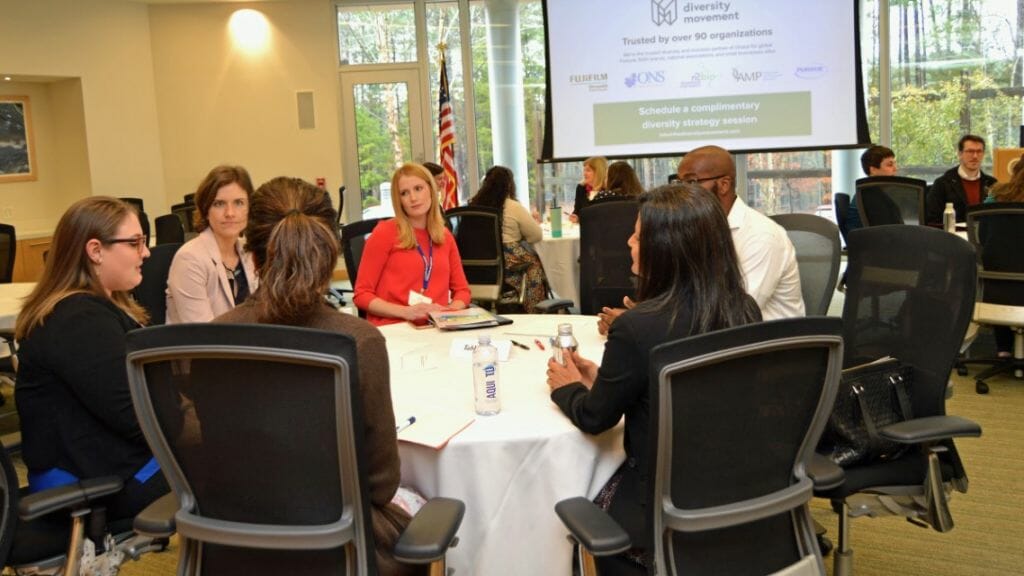 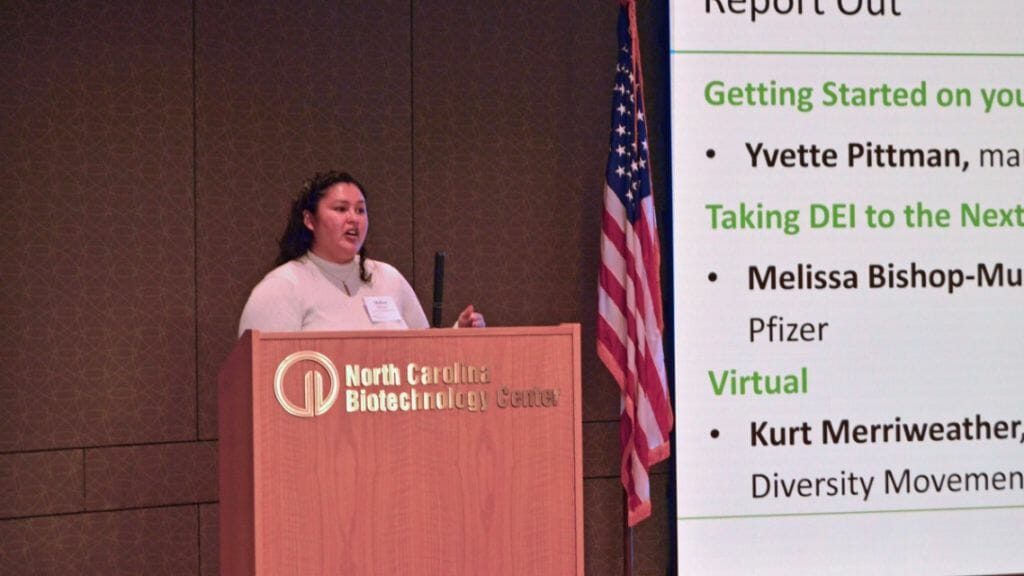