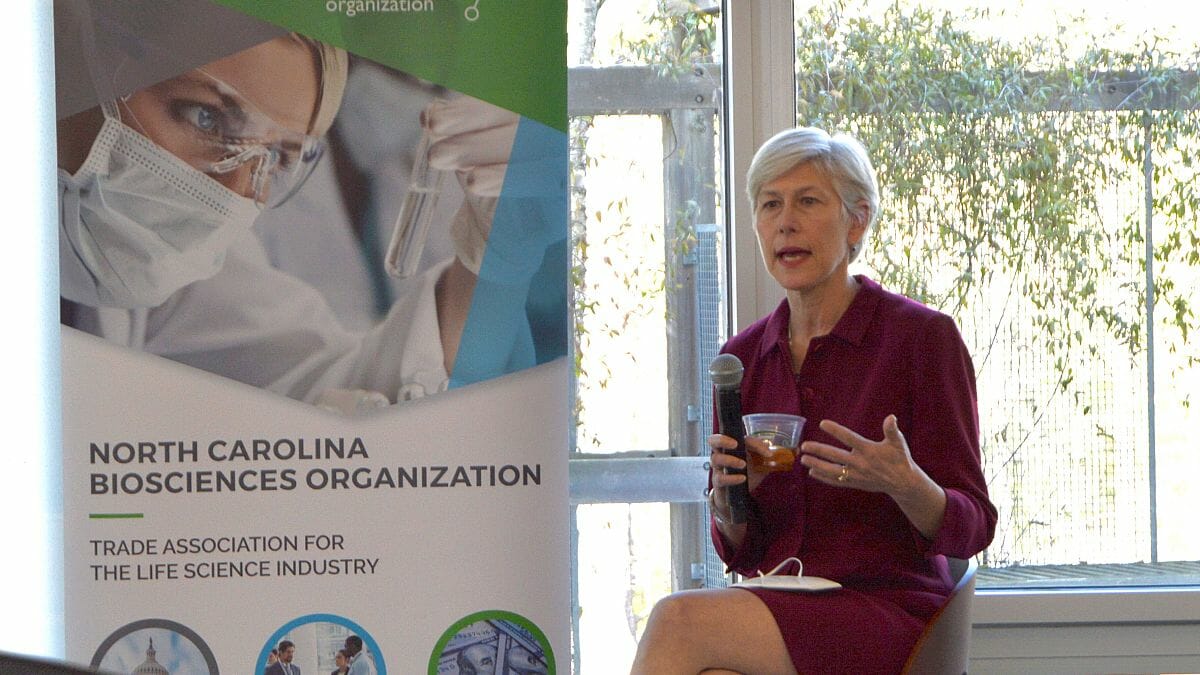 Immigration reform, protection of intellectual property, the threat of antimicrobial resistance, workforce training and more were topics covered by Rep. Deborah Ross at an NCBIO legislative round table held Monday, Feb. 14, at the NC Biotechnology Center.

Ross is a Democrat representing the 2nd NC Congressional District comprising Raleigh and southern and central Wake County. She was elected in 2020. She is a member of the House Rules Committee, Judiciary Committee and Committee on Science, Space and Technology.

“In the wake of the pandemic, the scientific community has found itself at the center of the world stage, and we know how much you are needed and how much you are appreciated,” Ross said. “Now more than ever, the groundbreaking scientific discoveries that are made here in the Research Triangle make a difference in the lives of so many Americans and so many of our fellow citizens of the world. I'm committed to being a partner with you in all your work and providing you with the support and resources that you need in Washington.”

Ross highlighted the House’s passage of the America COMPETES Act that Democrats say will increase U.S. semiconductor manufacturing and boost American competitiveness with China. The bill also aims at developing talent in the U.S. and fostering innovations in government labs that private companies could tap into for future products.

Increasing the pool of talent available to high tech companies is one of her priorities, Ross said. She said she offered several amendments to the COMPETES act to make it easier to tap into foreign know-how through changes to the Green Card system that would make it easier for workers in STEM fields to stay in the country. She said she is also a champion of bipartisan legislation for reducing the backlog of visa applications and for the “documented Dreamers,” children of visa holders who have grown up and been educated in the U.S. but who must leave the country at age 21.

After her opening remarks, Ross took questions from NCBIO members in attendance.

Q. How can the industry help pass the PASTEUR Act, a bill that would establish a program to develop antimicrobial innovations targeting the most challenging pathogens and most threatening infections?

A. The key to getting things done in the current Congress is to get legislation passed by the Senate first, Ross said.

“My advice to really anybody who wants to get compromise legislation through is get your senators lined up,” Ross said. “If they pass it from the Senate to the House, it's going to take us a whole lot less time to get it out of the House than if we pass something in the House and then it goes to the Senate. It's just the way the world is working right now.”

Q. The lack of federal budget was preventing the NIH from making good on its awards. When will relief come?

A. Ross said that the House had passed a continuing resolution that would fund the government through March 11 and that there is agreement on a framework for an omnibus budget bill.

“I think certainly by Easter, we're going to have an omnibus; there is will on both sides,” she said. “There are definitely people of goodwill, and we do have our top lines and then each subcommittee is getting their amounts. So I'm sorry that you have to wait a little longer, but the good news is we're moving forward in a bipartisan way.”

She added that the budget of the National Science Foundation is likely to double once the new budget is in place.

Q. What is the U.S. doing to support global health priorities, such as immunization and antimicrobial resistance?

A. Ross said that there is a “Marshall Plan” for global vaccinations circulating that has “significant bipartisan support.”

Q. Can anything be done to encourage the NIH to better match the pace at which industry moves?

A. “We don't necessarily have incentives in place for public-private partnerships and technology transfers that mirror our current time,” Ross said. “Some of these laws are more 40 years old. I mean, really, it goes back to JFK.”

“And then let's just be honest — this isn't necessarily a partisan issue — but the United States has not funded the scientific enterprise the way it should,” she said. “Since JFK, we have entirely relied on the private sector to do the things that are cutting edge and quick and new, which is good. We're a capitalist country.

“But you need the patient money, the researchers, the ability to transfer what they get into what you do, and we need to modernize that.”

She said she and other legislators were working to bring together the many stakeholders around this issue and would include NCBIO and its members in discussions.

Q. What protocols are being put in place to prepare the supply chain for the next pandemic and whether the focus was domestic or global?

A. “I think it has to be both, and the America COMPETES Act is certainly doing both as far as supply chain,” Ross said.

Q. Can you update us on the possibility of the TRIPS waiver moving forward? (The TRIPS waiver would bypass the intellectual property rights of the companies that created COVID-19 vaccines to allow the treatments to be manufactured without a license in other nations.)

A. “So lots of things are suggested in the heat of the moment, and then cooler heads prevail,” Ross said. “I doubt very seriously that the TRIPS waiver would make it through the United States Senate.”

She pointed out that intellectual property rights are enshrined in the core of the U.S. Constitution, not in the Bill of Rights.

“It wasn't an afterthought; it was in the body of the Constitution. I take that very seriously,” she said. “When something is imbedded in who we are and what we value and the kind of country that we are, we don't go and change that willy nilly.”

Q. How can we grow the workforce in North Carolina?

A. “Well, that's one of my favorite questions, and there are two things that you can do,” Ross said. “Encourage your members of Congress to make changes to our immigration system that will help your businesses and that will keep, in particular, young talent here.”

Secondly, we need to build a pipeline that starts before high school to prepare students for STEM jobs, and we need to locate some of those positions in areas that are currently losing traditional jobs.

Ross closed the discussion by encouraging members to arrange a meeting with her or her staff virtually or face to face in Raleigh or Washington, D.C.

“We love Zoom but, but face to face is very, very important to us,” she said. “So, thank you for what you do, and thank you for your time.”